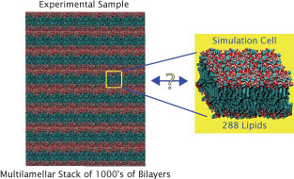 A novel protocol has been developed for comparing the structural properties of lipid bilayers determined by simulation with those determined by diffraction experiments, which makes it possible to test critically the ability of molecular dynamics simulations to reproduce experimental data. This model-independent method consists of analyzing data from molecular dynamics bilayer simulations in the same way as experimental data by determining the structure factors of the system and, via Fourier reconstruction, the overall transbilayer scattering-density profiles. Multi-nanosecond molecular dynamics simulations of a dioleoylphosphatidylcholine bilayer at 66% RH (5.4 waters/lipid) were performed in the constant pressure and temperature ensemble using the united-atom GROMACS and the all-atom CHARMM22/27 force fields with the GROMACS and NAMD software packages, respectively. The quality of the simulated bilayer structures was evaluated by comparing simulation with experimental results for bilayer thickness, area/lipid, individual molecular-component distributions, continuous and discrete structure factors, and overall scattering-density profiles. Neither the GROMACS nor the CHARMM22/27 simulations reproduced experimental data within experimental error. The widths of the simulated terminal methyl distributions showed a particularly strong disagreement with the experimentally observed distributions. A comparison of the older CHARMM22 with the newer CHARMM27 force fields shows that significant progress is being made in the development of atomic force fields for describing lipid bilayer systems empirically.
Biophys J 88:805-817. [PubMed Abstract] [Reprint] 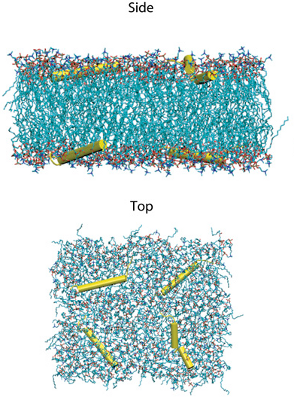 We have recently shown that current molecular dynamics (MD) atomic force fields are not yet able to produce lipid bilayer structures that agree with experimentally-determined structures within experimental errors. Because of the many advantages offered by experimentally validated simulations, we have developed a novel restraint method for membrane MD simulations that uses experimental diffraction data. The restraints, introduced into the MD force field, act upon specified groups of atoms to restrain their mean positions and widths to values determined experimentally. The method was first tested using a simple liquid argon system, and then applied to a neat dioleoylphosphatidylcholine (DOPC) bilayer at 66% relative humidity and to the same bilayer containing the peptide melittin. Application of experiment-based restraints to the transbilayer double-bond and water distributions of neat DOPC bilayers led to distributions that agreed with the experimental values. Based upon the experimental structure, the restraints improved the simulated structure in some regions while introducing larger differences in others, as might be expected from imperfect force fields. For the DOPC-melittin system, the experimental transbilayer distribution of melittin was used as a restraint. The addition of the peptide caused perturbations of the simulated bilayer structure, but which were larger than observed experimentally. The melittin distribution of the simulation could be fit accurately to a Gaussian with parameters close to the observed ones, indicating that the restraints can be used to produce an ensemble of membrane-bound peptide conformations that are consistent with experiments. Such ensembles pave the way for understanding peptide-bilayer interactions at the atomic level.
Biophys J 91:3617-3629. [PubMed Abstract] [Reprint] 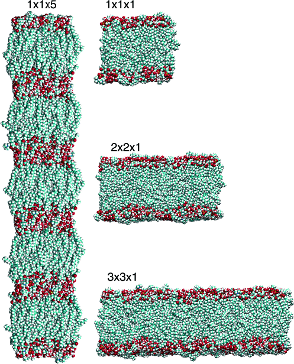 In the absence of external stress, the surface tension of a lipid membrane vanishes at equilibrium, and the membrane exhibits long wavelength undulations that can be described as elastic (as opposed to tension-dominated) deformations. These long wavelength fluctuations are generally suppressed in molecular dynamics simulations of membranes, which have typically been carried out on membrane patches with areas <100 nm2 that are replicated by periodic boundary conditions. As a result, finite system-size effects in molecular dynamics for several years, and it has been argued that it is necessary to simulate small membrane patches under tension to properly model the tension-free state of macroscopic membranes. Recent hardware and software advances have made it possible to simulate larger, all-atom systems allowing us to directly address the question of whether the relatively small size of current membrane simulations affects their physical characteristics compared to real macroscopic bilayer systems. In this work, system-size effects on the structure of a DOPC bilayer at 5.4 H2O/lipid are investigated by performing molecular dynamics simulations at constant temperature and isotropic pressure (i.e., vanishing surface tension) of small and large single bilayer patches (72 and 288 lipids, respectively), as well as an explicitly multilamellar system consisting of a stack of five 72-lipid bilayers, all replicated in three dimensions by using periodic boundary conditions. The simulation results are compared to X-ray and neutron diffraction data by using a model-free, reciprocal space approach developed recently in our laboratories. Our analysis demonstrates that finite-size effects are negligible in simulations of DOPC bilayers at low hydration, and suggests that refinements are needed in the simulation force fields.
J Phys Chem B 110:24157-24164. [PubMed Abstract] [Reprint]