This page describes some general principles of membrane protein structure and stability and outlines our approach to uncovering the detailed principles. Our ultimate goal is to be able to predict the three-dimensional structure of a membrane protein from its amino acid sequence.

One broad thermodynamic principle underlies the structure and stability of membrane proteins: The thermodynamic cost of transferring charged or highly polar uncharged compounds into the oil-like hydrocarbon interior of bilayer membranes is very high. This has two consequences. First, most of the amino acid sidechains of transmembrane segments must be non-polar (e.g. Ala, Val, Leu, Ile, Phe). Second, the very polar CONH groups (peptide bonds) of the polypeptide backbone of transmembrane segments must participate in hydrogen bonds (H-bonds) in order to lower the cost of transferring them into the hydrocarbon interior. This H-bonding is most easily accomplished with alpha-helices for which all peptide bonds are H-bonded internally. It can also be accomplished with beta-sheets provided that the beta-strands form closed structures such as the beta-barrel. All membrane proteins of known three-dimensional structure adhere to these principles. Examples of the two known structural motifs, bacteriorhodopsin (2BRD, 1) and a porin (1POR, 2), are shown below. The laboratory maintains a current list of integral membrane proteins whose 3D structures have been determined crystallographically or by NMR spectroscopy. 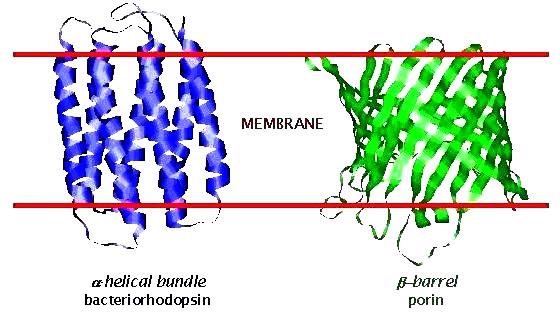 How Membrane Proteins Are Assembled

Natural membrane proteins, i.e. those that are encoded in a normal cell's genome and are responsible for vital physiological activities, are assembled by means of a complex process involving synthesis of membrane proteins by ribosomes attached transiently to a complex of proteins referred to as a translocon located within the cell membrane (below). This translocon provides a transmembrane "tunnel" into which the newly synthesized protein can be injected.  After the synthesis is complete, the ribosome disengages from the translocon (which enters a closed state) and the protein is released into the membrane bilayer where it assumes (in an unknown way) its final folded three-dimensional structure (3, 4). For more information, see translocon-assisted membrane folding. 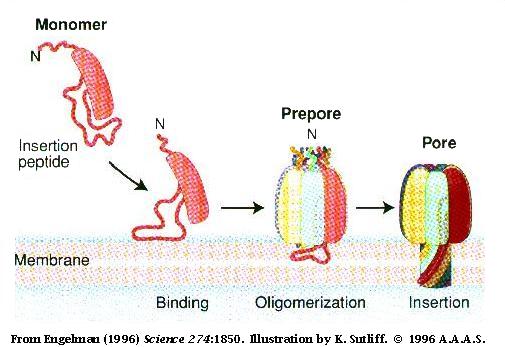 Adventitious membrane proteins are generally proteins such as toxins and antimicrobial peptides that incorporate themselves into membranes of cells without passing through the constitutive pathway. A good example is staphylococcal alpha-hemolysin (below) whose crystallographic structure was solved by Song et al. (5). The structures of various channel-forming toxins have been recently reviewed by Gouaux (6). The structure and function of the defensin antimicrobial peptides, which are of particular interest to our laboratory, have been reviewed by White et al. (7). Adventitious membrane proteins usually insert themselves into target membranes by physicochemical processes and are therefore of particular value in understanding membrane protein stability.

Energetics of Proteins in Membranes.

Regardless of how a membrane protein finds its way into a membrane, whether constitutive or non-constitutive, once located there it sits in a free energy minimum within the lipid bilayer of the membrane. One would like to sort out the energetics of protein-protein and protein-bilayer energetics that determine this minimum and hence the structure of the protein. This can be done in principle by unfolding and folding the protein within the bilayer. This is virtually impossible to do with whole membrane proteins: They are insoluble in the bilayer in the unfolded form because of the energetic cost of exposing the peptide bonds to the bilayer hydrocarbon interior. And, they are insoluble in the aqueous phase in both their folded and unfolded forms because of their highly non-polar (hydrophobic) character [see review by Haltia and Freire (8)] How, then, can one approach the problem? We have adopted a bootstrap strategy in which we surmise the energetics of membrane proteins from the studies of the energetics of small peptides in lipid bilayers.

These conceptual steps rely heavily upon an understanding of the structure of fluid lipid bilayer membranes. The subdivision of the bilayer into interfacial and hydrocarbon core (HC) regions is based upon the liquid-crystallographic studies of Wiener & White (12). A brief overview of the first 3 steps is presented below (9, 13).

1. The Unfolded (Virtual) Reference State. The reference state is taken as the unfolded protein in the interface. However, as far as we know, one cannot actually achieve this state with constitutive membrane proteins because of the solubility problems nor with small non-constitutive membrane-active peptides because binding usually induces secondary structure (partitioning-folding coupling). Thus, as is often the case in solution thermodynamics, the reference state must be a virtual one. We define it by means of an experimental interfacial hydrophobicity scale (14) derived from partitioning studies of pentapeptides that have no secondary structure in the aqueous or interfacial phases. This scale, that includes the peptide bonds as well as the sidechains, can be used to calculate the virtual free energy of transfer of an unfolded chain into the interface. The most important feature of whole-residue partitioning is that the energetics are dominated by the peptide bonds.

2. Partitioning-Folding Coupling and the Energetics of Interfacial Folding. A number of small peptides, such as melittin, are unfolded in the aqueous phase, but are fully structured upon partitioning into the interface. Even though the unfolded state is inaccessible, the energetics of the folding can be estimated from the difference between the virtual free energy of transfer of the unfolded state (calculated using the interfacial hydrophobicity scale) and the measured free energy of transfer of the folded peptide. Secondary structure formation appears to be driven by the reduction in the free energy of partitioning of peptide bonds that accompanies hydrogen bond formation. Experimental measurements indicate that the reduction is about 0.5 kcal/mol per peptide bond for beta-sheet formation by model hexapeptides (15) and 0.4 kcal/mol per peptide bond for alpha-helix formation by melittin (16). The accumulative effect of this modest reduction can be very large (~5 kcal/mol for melittin).

3. Energetics of Bilayer Insertion. This last step in folding is the crucial one, but the least adequately studied because of the insolubility and aggregation of hydrophobic peptides. Direct measurement of the partitioning of a hydrophobic alpha-helix or beta-barrel across a membrane is absolutely essential because we must know the true cost of partitioning a hydrogen-bonded peptide bond into the bilayer HC. Estimates for this cost vary from 0 to +1.6 kcal/mol (17, 18, 19). This means that calculations of insertion free energy based on sidechain free energies could be over-estimated by as much as +30 kcal/mol for a 20-residue helix!

4. Assembly of Secondary Structure Elements. The last important step is to understand the energetics of the association of secondary structure elements within the membrane. Don Engelman and his colleagues have shown that transmembrane helices from bacteriorhodopsin (bR) helices that have been independently inserted into membranes can subsequently assemble into the native structure of bR. This indicates that the insertion steps are independent of the intra-membrane assembly process. They refer to this insertion-oligomerization process as the 'two-stage' model. Our laboratory is not working on this aspect of membrane protein folding, but we have recently reviewed the critical literature (9). For further information, see (11) and visit the Engelman Laboratory Web Page.